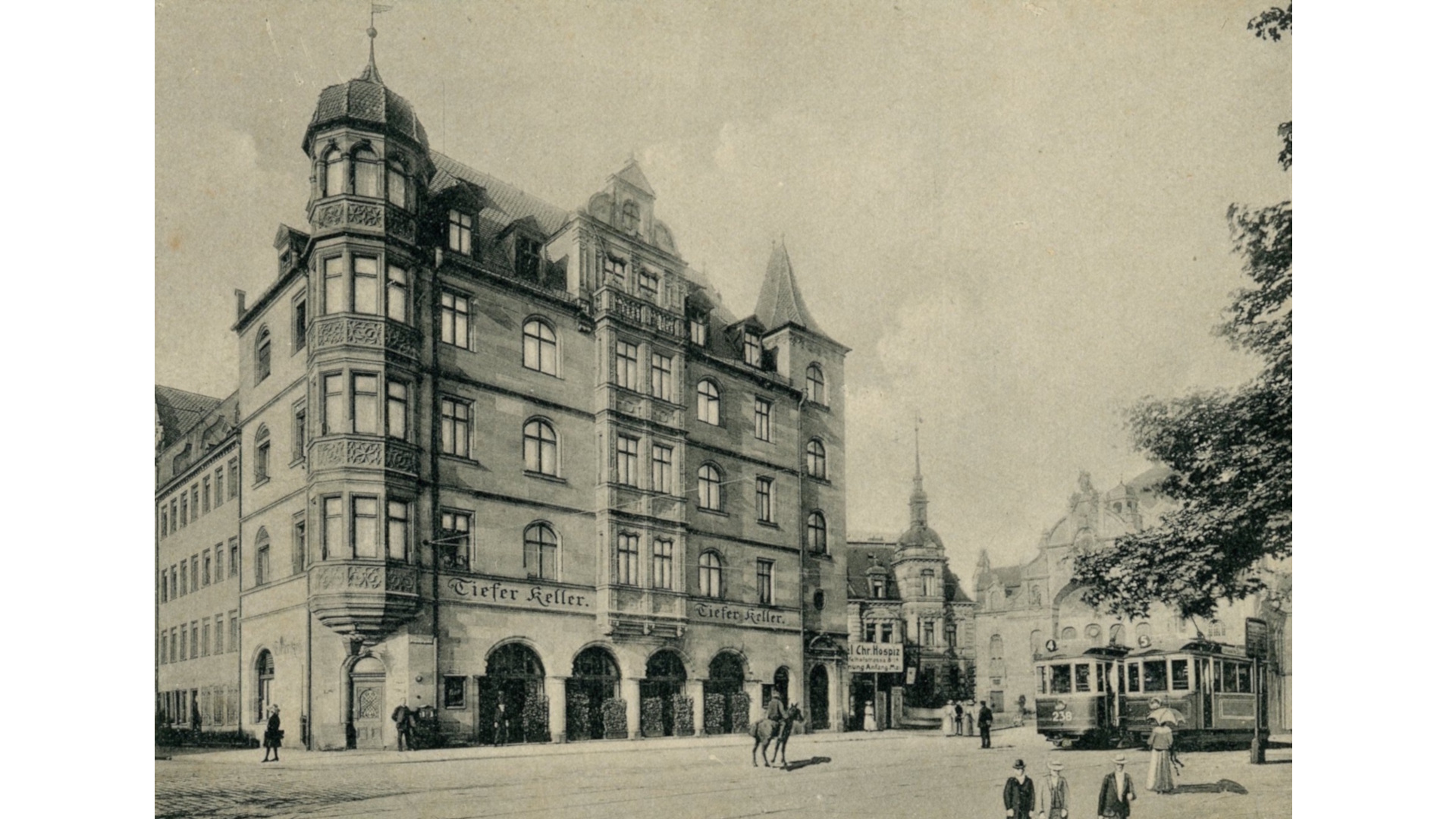 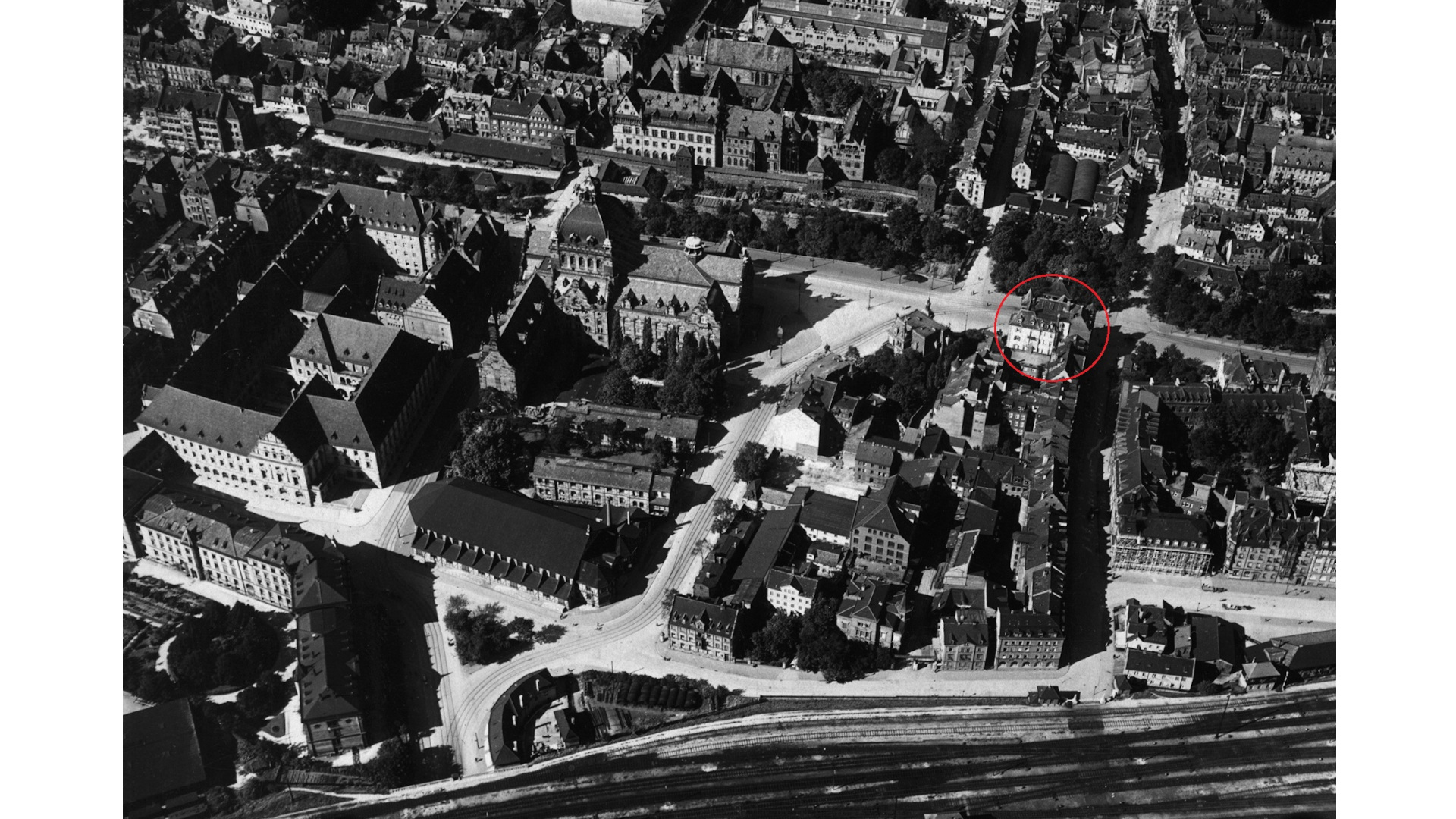 The “Tiefer Keller” restaurant was located on the ground floor of Frauentorgraben 17. On the far right of the picture is the opera house. Picture postcards 1905.

(Sebastian Gulden Collection)
The house at Frauentorgraben 17 is circled in red. A little to the west (to the left in the picture) is the opera house (today the Staatstheater). The Herkules Velodrome, with its dark roof, is situated directly below the opera house. The large transport museum building is located slightly to the left. Another museum, the German National Museum, is visible to the north of the opera house, behind the city wall. Aerial photo 1927. 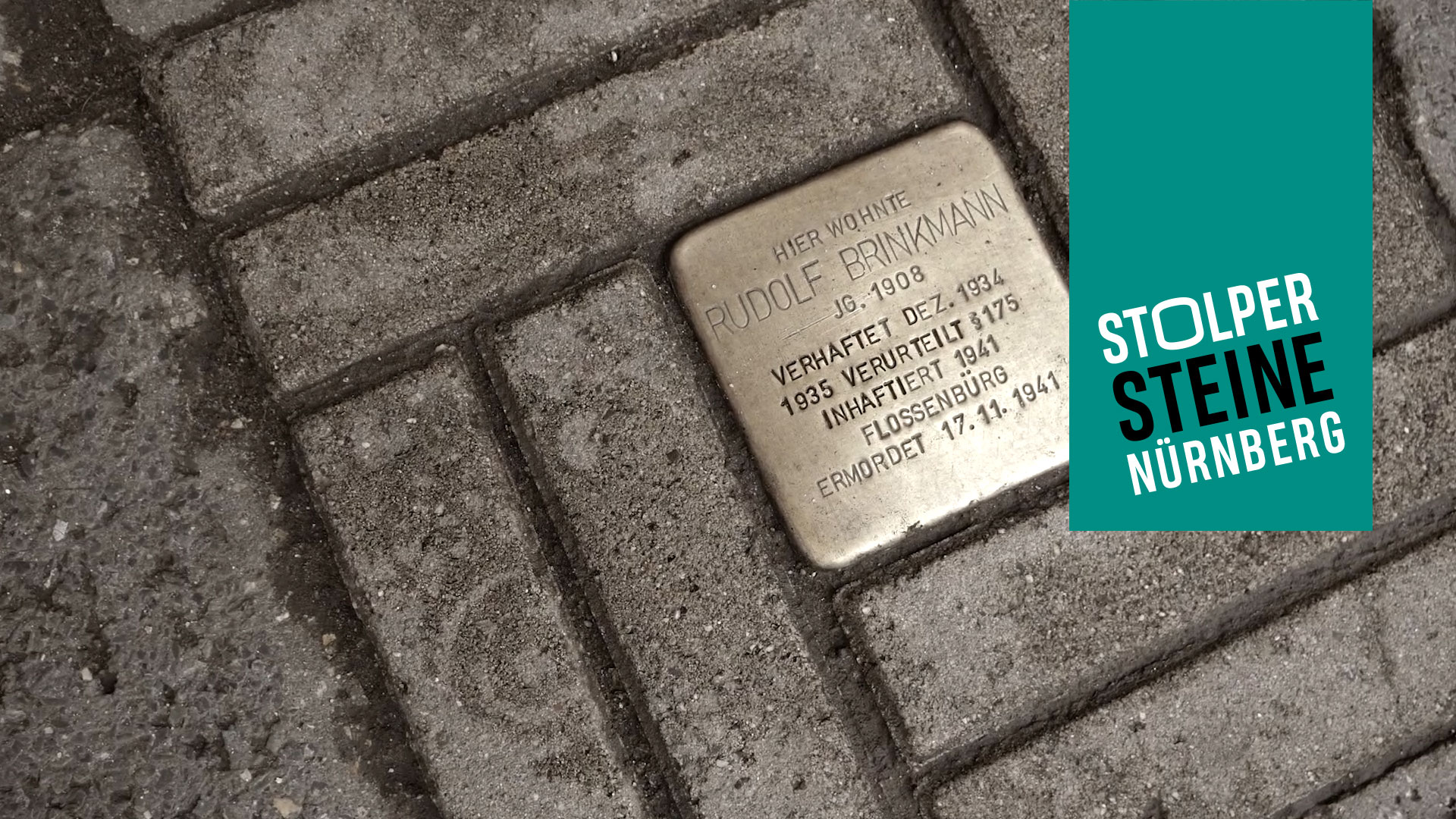 Since 17 October 2017 stumbling stones have been laid in Nuremberg in memory of homosexual victims of National Socialism. The project was initiated by the association Fliederlich e.V., under the leadership of Ralph Hoffmann (†). One of the stones that Gunter Demnig laid on 17 October was for Rudolf Brinkmann, who was murdered in Flossenbürg concentration camp.

Brinkmann grew up in Hildesheim, where he attended the middle school and subsequently the humanistic grammar school. After passing the Abitur (school leaving examination) he began studying Slavistics and philosophy, first in Freiburg im Breisgau and then in Münster. In 1933 Brinkmann moved to Berlin, where he lived a homosexual life, visiting the meeting places frequented by the gay community. The National Socialists had come to power in the same year, and the homosexual scene was experiencing increasing repression as a result.

In December 1934 the Gestapo arrested Brinkmann in the course of a raid targeted at homosexuals. He was taken to Lichtenburg concentration camp near Torgau and held there for eight months. After his release, the local court in Berlin sentenced him to eight months in prison for contravening Paragraph 175. Brinkmann was judged to have already served his sentence because of the period he had spent in the concentration camp.

However, the conviction had dramatic consequences for Brinkmann: he was now on police records as a convicted homosexual and had to put up with massive discrimination in his attempts to pursue a career. Not allowed to complete his studies, Brinkmann returned to his parents’ home in Hildesheim and decided to train as a bookseller. The plan met with resistance from the authorities however, and came to nothing. In July 1937 the Reich Chamber of Literature refused to grant the required authorisation, stating that, as a homosexual, it was not appropriate for him to pursue a career in bookselling.

It must have come as a great relief for Brinkmann when, almost a year later, he found work: at the beginning of July 1938, he started to work for the Official Bavarian Travel Agency in Nuremberg. There he quickly gained the appreciation of his colleagues. His direct supervisor saw in him a “very calm, hardworking and decent human being”. Brinkmann rented a room in the apartment of Betti Götz at Frauentorgraben 17.

In Nuremberg Brinkmann lived a secluded life, occasionally seeking contact with other homosexuals. His undoing came when he made the acquaintance of a 23-year-old man, whom he first met at the main railway station in February 1939. After meeting him a few times, Brinkmann told him he was homosexual and was interested in him. The young man subsequently denounced Brinkmann to the police.

Following extensive investigations, the Nuremberg-Fürth regional court sentenced Brinkmann to two years in prison on 3 August 1939. He started serving his sentence in the prison in Ebrach and was then moved to Bayreuth Prison. In February 1941, as the end of his imprisonment approached, the criminal investigation department in Nuremberg ordered that he be placed under “preventive custody”. Consequently, he was not released after serving his sentence but was sent instead to Flossenburg concentration camp. Rudolf Brinkmann was murdered there on 17 November 1941.

- Online-Book of the Dead of Flossenbürg concentration camp, URL: https://www.gedenkstaette-flossenbuerg.de/de/recherche/totenbuch/.

Statement from the society Fliederlich e.V. on the laying of stumbling stones